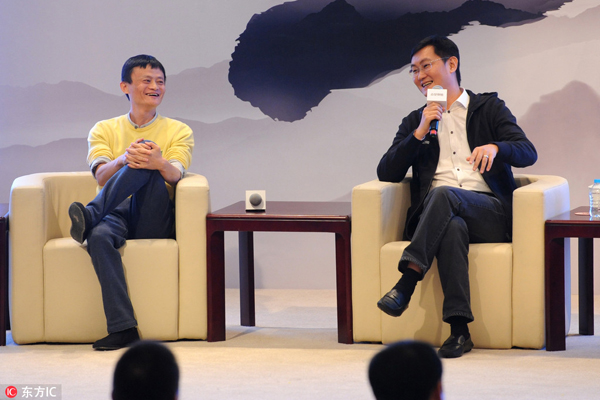 Forbes released its 2016 annual list of the 100 richest tech billionaires in the world onWednesday.
Worth a combined $132.7 billion,19 tech tycoons from the Chinese mainland are on the list, one fewer than last year.
Jack Ma, founder of Alibaba Group Holding Ltd, and Pony Ma, founder and CEO of Tencent Holdings Ltd, are ranked at 8th and 9th on the list, worth an estimated $25.8 billion and $22billion
respectively.
Bill Gates, founder of Microsoft Corp, remains the world's richest tech billionaire as well as the world's richest person, with an estimated fortune of $78 billion.
Jeff Bezos, founder and CEO of Amazon.com Inc, and Mark Zuckerberg, founder and CEO of Facebook Inc, are ranked second and third on the list.
Out of the world's 100 richest tycoons in tech, 51 are from the US, accounting for nearly two-thirds of the group's total wealth, while China has the second highest number of tech tycoons(19).
Ding Lei, founder and CEO of NetEase Inc, climbed from 26th to 17th, having an estimatednet
worth of $11.7 billion.
Lei Jun, CEO and founder of smartphone maker Xiaomi Corp, is ranked at 22th, worth $9.8billion.
Liu Qiangdong, CEO of JD.com Inc, has an estimated fortune of $5.6 billion, ranked at 37thon the list.
Jia Yueting, chairman and founder of LeEco Holdings Ltd, is ranked at 45th, worth $4.7 billion.